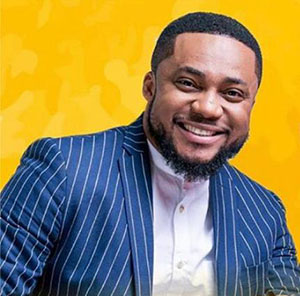 Tim Godfrey, an anointed God chaser, inspiring and innovative music director, is a multiple award winning music maestro of international repute. He is a music director, song writer, producer, voice coach, humanitarian and life coach…with over 20 years extensive experience. His creative style and approach to music is a break from the norm, he is known for his unusual style of blending contemporary fills into African mix.

He has changed the music history in Nigeria with the release of his 16 tracks debut album, “SOUND CHECK” in 2005, to the resounding reception that further cemented their place in the hearts of many with hit songs like Onyedika gi, Agidigba, Igbo Medley, Oriki and Hero.

He released his second studio album (twin album), ‘i-Worship and The Audience of One’ which has songs like Na You Be God, Mma Mma Ya, Kosi, which inspired lots of their fans all around Africa and Europe in 2014.

To date, the musical trendsetter has garnered one  AGMA AWARD UK,  two KINGDOM AFRICA AWARDS, one PBOF AWARD, one ABC MUSIC MINISTER’S RECOGNITION AWARD, one Outstanding performance Award TPH, Nigeria, only Nigeria gospel Artiste in the nomination list (Best international Act) BEFFTA AWARD UK 2011. Nominee best Artiste of the year FUTURE awards 2012, one NEA Award U.S.A. BEST GOSPEL ARTISTE/GROUP OF THE YEAR 2012, one TRUMPET awards 2016, one BEST MUSIC ENTREPRENUER OF THE YEAR awards 2017.. Tim Godfrey and Xtreme are known for excellence in performance with dexterity, dynamic contemporary singers with passion and energy put together to affect this generation extremely, ‘high energy with high praise and worship to cause a quake that makes heaven kiss the earth’.

Tim was one the judges of the prestigious reality talent show “DESTINY CHILD”. He has taken up huge projects like:

He is bold with his message and passionate about taking the message of the kingdom from the four walls of the church to nations of the earth. He is a man with a heart for the people, passionate about God, about fulfilling God’s plan for his life and staying absolutely in His will, he is committed to raising the younger generation of talents in Africa for the sole purpose of Worship unto God.